If there were some way to measure the most successful broadhead of all time, I would put my money on the Bear Razorhead, with the Zwickey a very close second.

Fred Bear was always the inventor, the tinkerer. In the 1930’s, Fred was making his personal broadheads from flat steel, in the style of tie-on heads modeled after the trade points of the wild west days. But these were very tedious to make and to attach correctly to the arrow, and certainly there was no way to mass-market such a head to the public.

Fred was very good at recognizing a market need, and soon started slotting Zwickey broadheads and adding removable bleeder blades in an attempt to discover a better broadhead which could be mass produced and marketed to the growing ranks of bowhunters of the day. The bleeders which were used in these slotted Zwickeys were very large compared to the bleeders that we see in todays broadheads, but the idea worked and encouraged Fred to continue with his experiments. 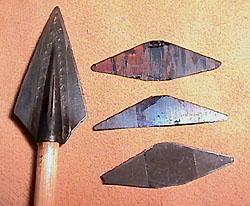 There were at least 2 different styles of “Airplane-Wing” bleeders used in the slotted Zwickeys of the days prior to the Razorhead.

In 1952 Fred began tinkering with a glue-on ferrule design for broadheads. These first heads were one of a kinds, but he was nearing completion of a design that would be both good for hunting and mass marketing.

By 1955, Fred was confident enough of his design that he made 300 prototypes of a new “Razorhead” design broadhead, and sent out samples to many of his bowhunting colleagues across the country asking them to try out this new head. If reports were positive, he planned to begin mass-production of them within the next year for the general public.

This prototype model Razorhead became known as the “Pinned Bear” due to the appearance of a “Pin-like” depression at the end of the ferrule. Actually, this was not a true pin, but rather a punch impression which held the blade to the ferrule better. Of the 300 prototypes which were originally made, only a very few survived to be in collections today. Apparently Fred’s bowhunting friends took him to his word and went out and shot them as he had asked, eventually loosing them in the swamps and forests across the country.

Note: Be on the lookout for these pinned models, and if you find one you have found a gold-mine as broadheads go. 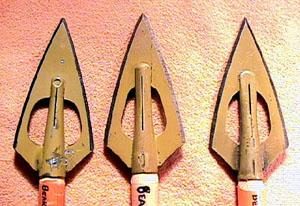 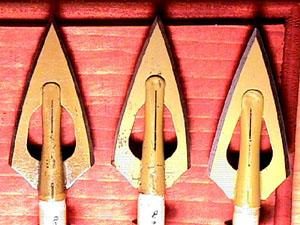 In 1956, Bear Archery formally introduced the Razorhead to the public. Known today as the “Bubble-Head” by many collectors because of the rounded ferrule tip, this broadhead was an instant success. With good quality steel, easily sharpened and aligned to the arrow, the Razorhead was on it’s way to becoming the largest selling broadhead of all time.

But Fred found a small problem with this original design. The “Bubble” on the tip of the ferrule was affecting penetration. So in 1957, Bear began flattening the ferrule tip to improve this situation. However, the vents on the 1957 Razorhead remained large as with the original 1956 model.

In 1960, a new die was made, with the vents made smaller and the ferrule tip even flatter.

Lastly, in 1964, the vents were changed again, looking much like a die-cut parabolic feather shape now.

The Super Razorhead was introduced in 1978, and the era of the old lime-green Razorhead came to a close. However, these new Super Razorheads did not have a reputation for holding up under use and lost favor with the masses of bowhunters in time. However, Bear Archery’s ability to market better than anyone else kept this broadhead in tackle boxes.

Finally, in 1981, the Stainless steel version of the Razorhead came out, but it is the old lime-green Razorheads that remain popular with bowhunters today both as collectors, and as shooters.

The auxiliary bleeder blade on the pinned ferrule Razorheads had the impression of a bear head in the vents, complete with ears and all as seen in this picture. The bleeder on the first production Razorhead in 1956 had the small pin hole in it, as shown. The bleeders soon changed to look like the bleeder on the right for all production after that. Be on the look out for these different bleeder blades!! 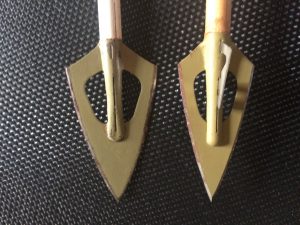 On the left is the extremely rare Bear Giant Razorhead.

Note- Among the rarest of all broadheads is the Bear “Giant”. Made in 1959 as an experimental head, Fred used these heads on his trip to Alaska that year. However, problems with the inch-and-a-half main blade caused poor arrow flight which kept these heads from ever going into production and today only 2 are known to exist in collections across the world.