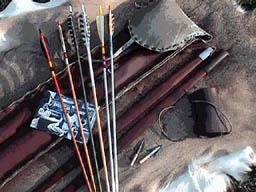 Out of the shadows of adversity sometimes come the most successful business ventures. An example of this is the fact that Fred Bear started Bear Archery after the plant in which he was plant manager closed during the beginning of the Great Depression. If not for the adversity of this greatest of financial disasters, Fred might have been content to remain in his comfortable factory job.

A 15 year old James Douglas Easton was shotgun hunting near Watsonville, California one fall day during 1921 when a shotgun which had been leaning against a car fell and discharged, striking young Doug hard in both legs. The next year of Doug’s life was spent almost entirely in a hospital recovering from these very serious wounds. It was during this extended hospital stay that a friend of Doug’s brought Doug a copy of the newly published book titled Hunting With The Bow & Arrow, by Dr. Saxton T. Pope.

There was ample time during Doug’s recovery period to seriously study the contents of this fascinating book, and Doug was a wonderful pupil. Almost immediately upon Doug’s release from the hospital Doug could be found making beautiful bows of Yew, and finely crafted wooden arrows of cedar, pine, and other straight grained woods. Easton wood arrows are scarce collectors items. Shown here are some early variations of the Easton target arrows and Easton hunting arrows.
Doug’s yew bows quickly became known as some of the finest around, but it was his arrows that were really gaining him recognition. By 1923, Doug had developed a new 4 point footed target arrow that was quickly recognized as the top tournament arrow in the country.
Two years after Doug’s nearly fatal hunting accident, while shooting a round of archery at Golden Gate Park in San Francisco, the now 17 year old Doug was approached by a distinguished older gentleman who commented very positively on Doug’s craftsmanship. Doug told the gentleman of how he had learned his skill by reading a book written by Saxton Pope. Much to Doug’s surprise, the older gentleman then extended his hand and introduced himself as Dr. Pope! James Douglas Easton shown in front of his Los Angeles location around 1940.

The success of Doug’s fledgling archery manufacturing business continued to grow until in 1932, when his business had outgrown his Watsonville location and he moved to Los Angeles. During this time in Los Angeles, Doug became very good friends with the famous bowhunter and Hollywood actor, Howard Hill. Howard lived just a few blocks down the street from Doug’s business. Howard and almost every other serious archer were now shooting Doug’s wooden arrows.

During his time in Los Angeles Doug also became friends with some of the Hollywood elite. This very rare Easton take-apart bow made of Osage and using horn nocks, was made for famous Hollywood playwright John Willard in 1937.

*Notice the grain of the pig skin grip, which was a trademark of many Jas. D. Easton bows.

The diamond shaped logo of Jas. D. Easton Archery Company was stamped into the bow riser, and actually wraps around the bow. The broadhead on the top is the Easton Forged (1932) and the broadhead on the bottom is the very rare Easton Barbed Aluminum Ferrule (1938).
Doug also decided to try his hand at making broadheads for his archery business during the year 1932. The broadhead design decided upon by Doug was a forged design, which today rate as a very scarce head for collectors and can be found in both a Round Shoulder variety (shown in photo) and a Bat-Winged Shoulder variety (not shown). In 1938, Doug experimented with another broadhead design, which used an aluminum ferule, and a barbed blade. Known to collectors as the Easton Barbed Aluminum, this broadhead rates as one of the rarest of all broadheads known to collectors. In this photo Doug Easton inspects some of his high quality shafting prior to the fletching process. This photo was probably taken in the late-1950’s.

1939 saw Doug move to yet another larger facility in Los Angeles. It was at this new facility that Doug began his search for an alternative to the wooden arrow. One of the first set of metal arrows made by Doug during the first year in this new building was given to local champion archer Larry Hughes. Larry shot these arrows very successfully in tournaments until 1941, when Larry won the National Championship with these new metal arrows.

However, World War II was now in full force, and aluminum was no longer available for anything that was not war related. This effectively ended Doug’s efforts to perfect the new arrow until the end of the war.

By 1946, the war had been over for almost a full year, and aluminum was now available to the public again in quantities sufficient enough for Doug to begin his testing again.. It didn’t take long for Doug to develop a new special hardening and thermal process that resulted in the first Easton trademarked aluminum arrow shaft, the 24SRT-X.

By 1953, Doug was confident of his ability to make a living in this business and decided that it was time to incorporate the business under the name of Jas.D. Easton Archery.

Amazingly, Doug ran this growing business by himself with the help of his wife and young son James and some occasional part-time help, until 1956 when he hired his first two full time employees. The success of the 24SRT-X was so quick in coming that by 1957 Easton Archery was already running short of space, and moved again, this time to a new 10,000 square building in Van Nuys.

Never one to rest on his laurels, Doug continued to experiment with a yet even better aluminum arrow shaft. In 1958, this effort resulted in the introduction of the best selling arrow shaft of all time, the XX75.