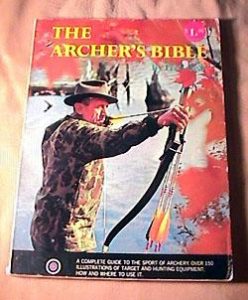 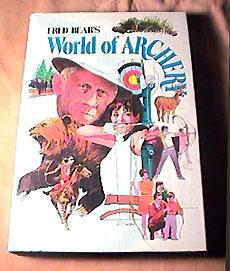 Fred wrote or played a major role in three books during his lifetime. The first was The Archer’s Bible in 1968. Many thousands of copies of this book were sold for many years after it’s introduction. This book can still be found in used book stores and from book search services fairly easily. The value of this book has remained fairly constant at the $8-10 range.

The next book which credits Fred as the author would be the classic “Fred Bear’s Field Notes”, first published in 1976. Page for page, this book has my money for being one of the best adventure books of all time. This book can still be found in first edition in used book stores and Internet book services to this day, although prices are starting to climb quickly. An average price for a good first edition of this book would range from $35-50 with a good dust jacket.

Note: In the past year, I have bought 3 autographed copies of Field Notes from the internet for no more than $35 each!!! What a bargain. Keep your eyes open. Go back and read my earlier column on Book Collecting for tips on how to find used books on the Internet. But Remember, if I don’t have it, I saw it first!!!

The last book for which Fred can be listed as the author was “Fred Bear’s World of Archery”, published in 1979. Intended to be an all-around information book about the sport which consumed his entire adult life, the first edition of this book can still be found on the shelves of used book dealers, and later editions can still be found in new retail stores. A good first edition would average around $25-35 on the used market.